Andrew Simms of The New Economics Foundation has a book out: Cancel The Apocalypse. He appears to have a large number of apocalypses, and mini-apocalypses, in mind, but I’ll just stick to what he says we should do about climate change. What we discover here is a rather long list of green herrings, that is red herrings with a Green tint.

I have put carbon efficient in quotation marks because when I first read it I wondered what it meant. Does Simms mean that wind is 25 times more efficient at reducing carbon emissions? No, what it means is that wind emits 25 times less carbon than nuclear. This of course is not what matters, what we want to know is if something emits too much in absolute terms and not relative terms. Let’s ignore what Simms claims about the emissions from nuclear and wind, and turn to the International Panel on Climate Change, who reviewed existing literature on the life cycle emissions of different energy sources. Here are their conclusions:

So, very little difference between wind and nuclear in terms of carbon emissions. The bulk of evidence is quite clear: both wind and nuclear are low carbon power sources, both emitting less than 50 g CO2eq/kWh. (If you wanted to make solar PV look bad you could quite easily say it is 3-4 times less carbon efficient than wind and nuclear. This would be consistent with the evidence.) This is the mainstream, consensus view on the subject, yet Simms says something completely different. What is his source? Work of Mark Jacobson, which quite remarkably got nuclear power to have much higher emissions by adding in the effects of future nuclear wars. As Barry Brook said at the time:

Can it really be that such wildly conjectural nonsense is acceptable as a valid scientific argument in the sustainable energy peer-reviewed literature? It seems so, which suggests to me that this academic discipline needs a swift logical kick up its intellectual rear end.

2. “Interconnecting wind farms that are displaced at distances of one hundred to two hundred miles apart means that a drop in output from any single farm can buffered by others.”

The United Kingdom is, top to bottom, about 650 miles long. And its wind farms are certainly spread out enough to find out how effective this buffering Simms speaks of is. However his statement may have had a little less impact if he had shown what the UK’s combined wind farm output actually was from October 2011 to March 2012 (source): 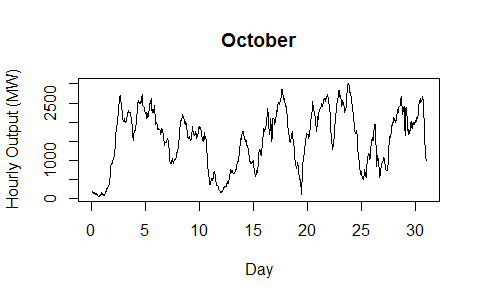 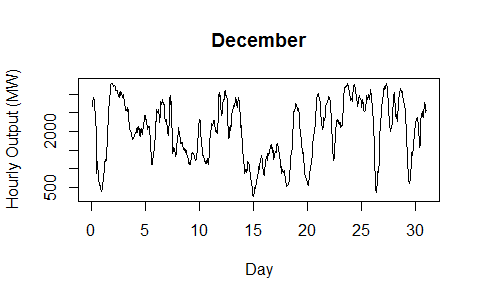 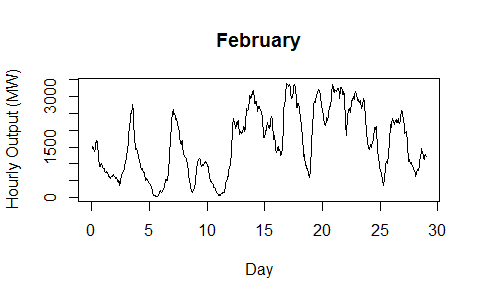 Rather weak buffering I think most people would agree. And many days this buffering seems incapable of stopping the combined wind power of the UK’s wind farms from dropping close to zero. Simms does not appear to give a source for his “100 to 200 miles” buffering claim. However I can guess, with some confidence, that he has dropped a zero from his claim, and that what he really means is that wind farms 1000 to 2000 miles apart have output that is uncorrelated. This of course is just another version of the “if it’s not windy one place, it will be windy somewhere else” cliche. These cliches are in need of quantification, and when this is done it seems to show that joined up wind farms over all of Europe say don’t provide a solution to wind power’s intermittency.

3. German solar comes to the rescue of France during cold spells.

France heavily relies on electric heating. So, if it is cold electricity demand spikes. A simple consequence is that it often imports a lot of power from Germany when it is really cold. Rather strangely Simms makes it seem that German solar power plays a key role here:

During a cold spell, a lack of capacity in France meant rising energy imports from Germany. But where exactly was that helping hand coming from? A spokesperson for the ‘transit grid operator’ Ampiron said at the time that solar ‘photovoltaics in southern Germany are helping us a lot.’

There are two basic problems with this claims. First, solar power in Germany is at its lowest point in winter:

Second, French electricity demand peaks precisely when there is absolutely no solar power, around about 7 pm. Fossil Fuels are much more likely to be doing the extra work at this time of night. So, that helping hand is probably a lot dirtier than it suits Simms to admit.

4. Weather appears to be a bigger problem for nuclear power than for renewables.

This is one of the stranger claims Simms puts forward. He hand wavingly dismisses claims that intermittency causes serious problems for large scale renewables, and then turns the argument on its head to make it seem that weather patterns cause more problems for nuclear power than for renewables. The argument for renewables is that intermittency puts some upper limit on the amount of power you can get from them. So, does weather patterns put significant limits on the amount of power you can reliably get from nuclear power? It is true that high temperatures can result in nuclear power stations shutting down because the water is too hot too cool the reactor. However France has been reliably getting over 70% of its power from nuclear power stations for years, which would suggest weather does not put significant limits on nuclear power. Yet, rather strangely it is to France that Simms turns to make his implied case that weather impacts nuclear power more than renewables. This again is simple spin of the facts.

Again this is a dreadful way to talk about the emissions from power sources. It’s a broadly correct statement. However what matters is how CCS compares with non-CCS coal. And most studies indicate it emits about 5 times less carbon. Simms appears to want us to reject nuclear power. So, what does he want to happen when the wind is not blowing? In long periods of low wind we will have to rely on fossil fuel plants. Would it not be better to have CCS plants?

Revealingly in the prior paragraph Simms promotes non-renewable Combined Heat and Power, but does not bother asking what the emissions are for it. Again, this is another reflection of how Simms appears capable of dispensing poorly thought through talking points instead of putting together a coherent plan for dealing with climate change.

This brings me to my final point.

6. The alternatives to nuclear are “open to community ownership and management.”

Simms appears to believe that widespread community ownership of renewable energy is the solution. This flies in the face of the realities of energy generation. The examples of community ownership he provides are  lightly populated rural communities owning wind farms. How large scale can this possibly get? Not very large it would seem to me. Consider offshore wind. The UK has close to the world’s best offshore wind resource. Now, how exactly can we exploit this if we are to rely on local ownership and management? When it comes to offshore wind small is not beautiful. We are talking about wind farms that cover hundreds of square kilometres, requiring hundreds of millions to billions of pounds of investment. Unless you have a few billionaires living near the coast then community ownership is a non-starter. So, community ownership has a role to play. However if you are serious about climate change then you should realize that it will be a limited one. Realistic solutions to climate change will require either governments or large companies to play a key role. This may be unwelcome to some, but there it is.

Great piece. Love the bit about community ownership, I had a tilt at that myself a little while ago…http://decarbonisesa.com/2011/08/10/areva-sinners-saints-or-just-big-business/

Point on the nuclear closures during hot weather in France. I am almost certain this is a result of regulation about the temperature of the river and the temperature of the outlet water, “Too hot to cool the reactor” sounds like it actually could not cool the reactor. That would be a pretty hot river. Annoying I can’t find a quick link for that issue. Minor point on an otherwise great piece.

I probably should have been a little less brief in that paragraph. The source Simms used was this from Joe Romm, another anti-nuke among the climate concerned: http://thinkprogress.org/climate/2009/07/06/204331/france-imports-uk-electricity-summer-heatwave-puts-nuclear-power-plants-out-of-action/

Simms basically makes it seem that 1/3rd of French nuclear capacity was out of action due to the hot weather. This is a total misreading of it. About 20 of 63 GW was out of action, according to the story. French electricity demand however is significantly lower in summer than winter. In fact it’s almost always well below 63 GW. (http://clients.rte-france.com/lang/an/visiteurs/vie/prod/realisation_production.jsp) So France responds by shutting a lot of the reactors down for refuelling/maintenance during summer.

Another point that you didn’t raise there was just how many offshore wind companies are really just oil companies for whom offshore wind is a side business. It also makes it clear that the fight the fossil fuel companies strategy pushed by many is problematic. Offshore wind is probably the best example of this. Oil companies have a long history of working in these difficult conditions. It’s knowledge and experience that probably needs to be tapped if you want to expand offshore wind.

The basic mathematics of energy make it clear local ownership has limits. I suspect however that most greens simply aren’t willing to change their minds on this.

And by the way, coal and gas thermal plants were also ordered to shut down because of the same issue of river temperature. And this particular event dates back to 2003 and an exceptional heat wave in august. It caused an excess of deaths of about 15000.

The 2003 European heat wave also probably resulted in a Europe wide lull in wind farm output. Other than solar power nothing probably would fare particularly well.